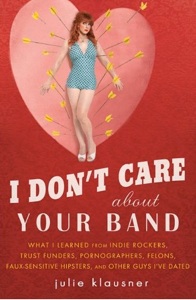 I recently joined Facebook and that is another story for another time, but its relevant to what I’m telling you because I’ve never made a friend this way until recently.

I was reading my favorite magazine, The Believer. I always turn to Sedaratives when I first get it and this month it was written by a girl named Julie Klausner.  It was very funny and caused me to look up her web site where I read some of her other material. Even funnier. I wrote on her “wall” telling her how much I liked her writing. One thing led to another and I was taking her out to lunch because she was here from New York on a book tour. Her book, I Don’t Care About Your Band, had some of the funniest things I’d ever read about relationships.

When trying to figure out where to eat, she assumed that I might have that “California” thing and be all ‘food restriction-y”. I told her I was a native and that kind of crap was usually behavior adopted by people who move here. One thing we got out of the way right immediately was that neither of us was a vegan or vegetarian. We had some really arch things to say about people who are, but I’m not going to repeat them because you never know, right?

I went online to suss out the top Burger joints in Los Angeles. Chow Hound has reviews, which I like.  When people are descriptive, you know what standards they hold the food to. The star ratings also save you a lot of time. What came out on top was Golden State on Fairfax.

One of the reviews talked about the buns. They’re made of brioche.  The reviewer said other places have that kind of bun, but they’ve been dry, whereas Golden State’s was slightly crisp and buttery on top, but had that delightful yeasty, spongy texture when you bit into it. Oh yeah. They didn’t take reservations, so in my email to her, I referred to that as ‘going commando’.

The place is small but very attractive in that modern retro, gen-ex style. The menu was the kind where you want everything. They have turkey and veggie burgers too, along with BLTs and chicken sandwiches.  The sides included yam fries which are always a winner with me but I was trying to amortize the burger with something lighter, so I ordered the Persian Cucumber salad with lemon vinaigrette. It was light, crunchy and full of flavor. Satisfying.

I ordered The Burger. No, really, its called The Burger and it was everything the review said it would be. The bun was heavenly, the beef was perfectly cooked and the flavor was everything you want your beef to taste like. I’ve pondered that last sentence over and over, and I stand by it. They offer hot dogs and salads and they also feature Beer Floats. Their menu is online and I can’t speak to the float. Its sounds nauseating to me. Writing about it makes me want to go back. In fact, I’ve been trying to find any excuse. I’m glad it’s in LA. Hey, Golden State. Duh.