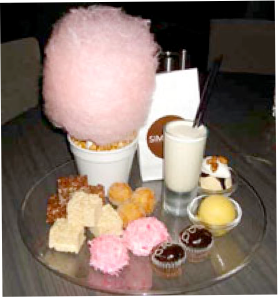 Party at the Sofitel

Yesterday was the end of almost a years worth of planning and preparing for our youngest daughter Hannah’s Bat Mitzvah.

She did beautifully; you’re so sweet to ask. My husband Chad and I can never seem to do things simply. For instance, when the kids were small, we always did theme parties. One year, we did The Westwood Minster Dog Show for our oldest daughter Lena’s 10th birthday. Her friends brought their dogs and if they didn’t have one, they were judges deciding who would get the ribbon for:

You get the idea. Each ribbon had these things printed on them. We made an obstacle course for the dogs using the kid’s old toys: an inflatable pool, a collapsible tunnel, a suspended tire etc.

Another time we did a Harry Potter party. There was no merchandising at the time so we made everything ourselves. We created spells that rhymed for each kid, citing personal information about them in the spell. Like if they had a lot of siblings, the spell would give them their own room or something like that. I played the role of Snape.

Our younger daughter’s Bat Mitzvah was no exception.  We decided to do The Friendship Awards as a theme for her evening party. It was the end of the Bar/Bat Mitzvah season. These kids had seen it all.  This would give awards to her friends in various categories that highlighted each friend’s talents or attributes, like: Nicest, Best Artist, Best Taste in Music and so on.  We even had a ‘paparazzi” line that shouted out the kid’s names as they walked the ‘pink carpet’ on their way to the ballroom.

But, because this was an affair at a hotel, it was catered.  The Sofitel has Cary Simon as their in-house chef.  Our menu, which was selected after a tasting, can best be described by one of our guests as “so good I wouldn’t have minded paying for it myself”.

Since the nighttime party was mainly for the kids, the only adults being our out of town relatives, we created two menus; one for us and one for the kids

With the help of Joanie Allen (my fairy God mother) who is the executive party planner at the hotel, we had a blast choosing this stuff.  The kids had passed hors d’ouvres of mini grilled cheese sandwiches and tacos and chicken tenders and a kids’ mixed drink bar (Virgin Daiquiris, Coladas, Virgin Fruit Martinis, Milkshakes in cocktail glasses and Shirley Temples.) Their meal was a pasta bar featuring Caesar salad, assorted pizzas, pasta marinara, pasta Bolognese, and lasagna.

But, here was the piece ‘o’ resistance: Chef Cary also has his own Kid’s Dessert Menu. Here is what it is:
Pink Cotton Candy
Assorted Cupcakes
Carrot Cake and
Milk Shakes

Uh huh!! Now, y’all know how I feel about cotton candy. (Please read my review of Boa Restaurant in the archives of oneforthetable.)

But wait, there’s more!  Let me tell you about the adult’s dinner. There was gnocchi with sautéed artichoke and black olives and fresh lemon that was the kind of good that makes you happy to be alive.

The main course was a steak so tender, you had to wonder how they could do that on such a large scale. A potato pancake with truffle oil and sautéed shitake mushrooms accompanied it. The experience of this meal made me think about a science fiction film I once saw called Fantastic Voyage about doctors who were shrunk down and injected into the President. If they’d landed on my taste buds that night, they wouldn’t have wanted to leave.

The dessert was a sorbet trio made with seasonal fruit that inspired one guest to say “I feel like I’m doing something healthy by eating this”.  The apricot sorbet was orgasmic.

We worked our asses off putting on this event for our “baby”.

For some crazy reason Chad and I have never been satisfied with an ordinary party for our kids. We’ve always done some nutty, ‘high concept’ thingamajig. The Sofitel and Joanie Allen not only allowed this, they fully supported and added to it.

So many people would tell us planning this thing was like planning a wedding. Especially the cost. Thank God you can’t divorce your Bat Mitzvah.