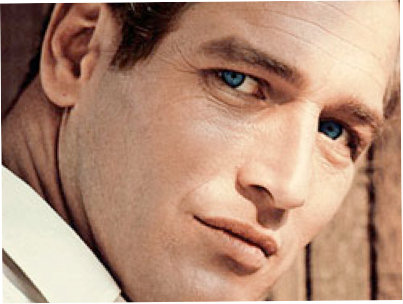 My twin brother’s name is Paul Newman and when we were growing up in Beverly Hills in the 1960s, because Paul had his own phone line, and because he was listed in the phone directory, we often got calls from fans thinking it was the home of the movie star. When you’re a teenager and you’re desperate for something to feel superior about, this fit the bill quite nicely.

“How could they possibly think he’d be listed?” we’d scoff.

I never had a crush on Paul Newman, the movie star. He was no David McCallum, that’s for sure.  But I could certainly appreciate what a good actor he was. After seeing him in Slapshot, The Verdict, Absence of Malice, Sometimes A Great Notion and The Hudsucker Proxy (the funniest I’d ever seen him) I was an admirer.

When I was living in New York, doing Saturday Night Live, I saw Paul Newman once at a restaurant. His table was across from mine. At this point in my life, at the ripe old age of 23, I thought anything and everything I did and said was interesting and I have newspaper and magazine interviews that preserve this folly in perpetuity. He was with a large party of people and in the middle of a story, when I excitedly approached him, interrupting him, and introduced myself. I thought surely he’d a) know who I was and b) just be thrilled to pieces with the anecdote I was about to lay on him about my brother’s name.

Neither thing happened. I was stopped in mid sentence by the coldest, angriest look I’d ever encountered. The famous blue eyes shot me a look that didn’t require any words. A look that said “how rude of you to interrupt me, I don’t know who you are, I don’t care who you are, go away”.  That I did, with my tail between my legs. After that, every time I saw his picture or heard his named mentioned, I burned with shame and embarrassment.

This morning, I saw on the news that he’d passed away. I knew that he’d been married to Joanne Woodward for a long time, but I didn’t realize it was for 50 years. I figured the whole salad dressing thing must have started out as someone’s recipe, but I never figured it was his.  He told a story to Gene Shalit about his kids (five of them!) asking him to make gallons of it before he went on location and giving it to friends as well.  Can you imagine? It’s like finding out Kirk Douglas has a kick-ass banana bread recipe that he bakes for friends for the holidays. As he’s telling this story, for the first time, I see it. I see the appeal. I see what the majority of red-blooded American, heck, all women have seen in Paul Newman. A masculine beauty, who is articulate, loyal and can cook!