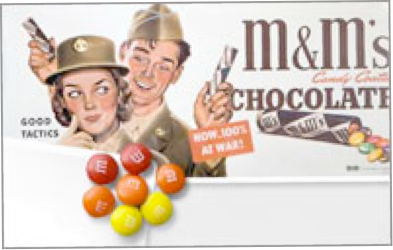 Last night, at about 2:00 a.m I woke up and couldn’t go back to sleep.   Normally I give myself an hour of trying to go back to sleep before I give up and go downstairs to watch TV. Last night I knew it just wasn’t gonna happen.

It was warm in the living room and our two Portugese water dogs, Stachmo and Gabby followed me, hopped up on the couch, and snuggled close. After five minutes of channel surfing, I landed on a documentary with the intriguing title: The Chocolate Wars. It was about the rivalry between the altruistic Milton Hershey and the odious Forrest Mars, son of Frank Mars, the founder of Mars Candy Company.

It’s not every day that one even considers the personal rivalries and character of confectionary companies. What could be more whimsical than a chocolate factory? But, when you consider the fact that the most well known story/ made into a movie Charlie and The Chocolate factory was inspired by an article Roald Dahl read about Milton Hershey, the plot thickens.

Milton Hershey was a model of corporate philanthropy. His entire life story is so inspiring and poetic in his Utopian vision; it’s hard to believe it hasn’t been dramatized.  Hershey would definitely be cast as the protagonist, while the brooding and vindictive Forrest Mars would be a fabulous villain.

While Milton and his wife Catherine weren’t blessed with children, prompting them to establish an orphanage for boys, the unlucky Frank Mars spawned Forrest.  A son so angry, that he started his own candy business in England, naming it Mars Ltd, in direct competition with his Dad. This fascinating documentary never explained why Forrest was so horrid. I guess some people are just born bad.

Frank Mars had a congenial and fruitful relationship with The Hershey Company.  Hershey provided the chocolate coating for all the Mars most successful candy bars, starting with Milky Way, Three Musketeers and Snickers.  When Frank Mars died suddenly, Forrest returned from England and took over the company. His first order of business was to stop buying from Hershey.
I have to admit, when I saw the first picture of Forrest during the documentary, he had a scary resemblance to Richard Speck. His disposition was so clear from the looks of him, I wasn’t surprised when the show went on to describe his nastiness.

It was a classic case of good vs. evil.   Hershey, coming from fine Mennonite stock was so clearly motivated by a passion for his product and the good the profits allowed him to do, including building a town for his employees. He provided transportation; a library, parks, schools and specifically, he wanted no part of the soulless row houses when planning the community. He made sure the architecture was homey and comfortable and the streets were tree lined.

Forrest was, by all accounts, motivated by his obsession with success and world domination…. well, the world of candy making.  I kept thinking “There Will be Chocolate”.

Forrest was certainly cunning in his use of advertising. After discovering a candy manufactured for the Spanish soldiers during the Spanish American war, he appropriated the concept of candy that would “melt in your mouth, not in your hand.” Conceived as a chocolate candy with a hard candy shell to prevent it from melting, it served its purpose as a wartime practicality.  The ad was targeted for the American housewife who loved the idea of a candy that kept little Johnny’s hands, face and clothes clean. It was the most successful campaign for Mars and put M&Ms on the map.

Mars, to this, day is still one of the largest family owned companies.  It was famous for it’s secrecy and when it didn’t acknowledge the death of Forrest Jr. in 1999, they maintained, “due to private ownership, there was no need to account to anyone but themselves”. Sounds like the Bush Administration.

Hershey couldn’t have been more opposite.  His legacy was endowed to the Milton S. Hershey School (the orphanage he and his wife started).  And with sublime irony, the man who took over the company was a product of that orphanage.  His gratitude for all that Hershey’s institutions gave him informed his conduct as CEO.

Last summer I went to Hershey Park with my daughter Hannah and our cousins, The Swerdloffs.  As a native of Los Angeles, I was one of the first kids to sample the newly constructed park designed by Walt Disney.  This place had the old-world charm of Main Street Disneyland, with the ass-kicking roller coasters of Magic Mountain.  At the end of the property is the Museum. Taken through a tunnel riding on a Model-T on a track, you’re shown a fascinating tour of the history of Milton Hershey. The building of the town and the process, from start to finish, of how the chocolate is made. Boy, it’s intricate. When you emerge from the tunnel at the end of the tour, you’re handed a bag of colorfully wrapped Reese’s Pieces.

But that’s not all. Then you’re planted squarely in front of their massive store. Shelves and shelves of candy I’d never seen before.  Cookie incarnations of Reese’s Peanut butter Cups, York Peppermint Patties as well as their other well-known brands. Did you know Hershey owns Cadbury?

I’ve sometimes had dreams where the house I’ve lived in for the past 28 years has a room in it I never knew about.  That’s what this felt like.  Like a separate reality where Unicorns live and secret versions of your favorite childhood candies dwell. As if, when you took them out of Shangri-la, they would disappear.  Well, they did disappear, but were found weeks later, living on my thighs.