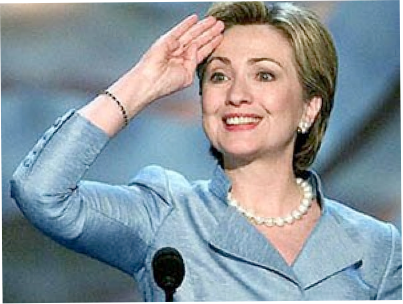 If the Shoe Fits

I felt Keith Olberman’s, uh, well, let’s just say it, rant about Hilary Clinton the other day couldn’t have framed more succinctly the odious behavior she’s displayed and how far down she’s sunk in her quest for the nomination.

I only know what I see on TV or hear on NPR, so admittedly, I don’t read everything there is out there in order to be fully informed about the candidates.  But no matter what claims either candidate’s critics may make about ‘lack of real experience’, or ‘what bills have they ever actually written or gotten passed?’ that only furthers the notion they’re both starting from equal footing.  And if that’s the case, I know who I want my candidate to be.

So what if Hilary is a woman. Why does she have to be THIS woman? A woman who is so transparently pandering to every constituency that she seems to adopt a slight accent or physical nuance to align herself with the state she’s trying to woo. She’s a one-woman band, with folksy personal anecdotes to fit every issue. Who would have thought that Hilary went duck huntin’ with her pappy? But don’t call her out on these manipulative antics or she might label you an elitist. That seems to be the most popular rejoinder against an intelligent argument.

And don’t even get me started about her ‘hanging in there’ till June. Some admire her tenacity; I see it as stalker mentality.  Either that, or the compulsive gambler who won’t leave the casino because it has so much of her money, if she can just ‘hang in there’….

Her campaign often goes back to statements about how her behavior would be tolerated in a man. Crap. The aberrant assertion that her insistence on staying in the race shows guts is like McCain saying ‘we won’t surrender in Iraq”! Arrgghh!!!

I don’t support Obama because I don’t like Hilary. I never liked her and I’m ashamed to say that I voted for her in the primary, kicking and screaming all the way because Edwards was out of the race and at that point I didn’t have any impression of Obama to go on.  Subsequent to that, seeing the way he conducted himself in the debates, it became clear to me that the guy was smart, level headed and I liked his positions. The infantile attempts to undermine him with “bittergate” were infuriating. Yes, the Reverend Wright business isn’t good. But if I were to choose between ‘political animals’, and Obama’s involvement in Wright’s church was clearly political, I would choose him over Hilary whose antics have become more repulsive as time goes on. I agree with Keith Olberman’s outrage about her statements regarding Robert Kennedy’s assassination “In THIS America?” How dare you!

What will you do if the nut cases you tried to cue didn’t take the hint?