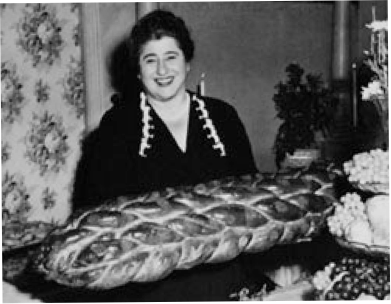 I was recently given a gift of an out of print cookbook called The Molly Goldberg Cookbook.  When I first saw it I was amused and when I opened it up, I immediately saw a cabbage recipe I wanted to make. Score! Here was a cookbook that had that “Through The Looking Glass” aspect to it. These were recipes long forgotten, mysterious in their 1950-ness, soon to be resurrected by me!

I had a faint notion of who Molly Goldberg was; however, despite the constant ‘jokes’ in my house about my age I was actually too young to have seen The Goldbergs on TV. It still amazes me that I saw Amos n’ Andy. The premise of this prototype for all subsequent sit-coms was the lives of Jewish immigrants, usually featuring a solvable family or friend-related problem.  Molly, in her infinite “Jewish Mama” wisdom would involve herself in these neighborhood and family dramas dispensing invaluable advice.

Upon closer inspection of the book, three things struck me.  One, the book was arranged almost like a ‘wraparound’.  That’s a reference to a strip show on TV that had interstitials.  Molly had her ‘bits’ that introduced the story behind some of the recipes. These bits represented a microcosm of cultural idioms and the social challenges and changes that arose from the Diaspora.  The other thing I noticed was that many of the recipes were ‘from hunger’.  An expression meaning, well, lacking in taste or desirability.  The third thing, which reminded me of something my dad said about brisket:  that it killed more Jews than bullets.  Some of the recipes were so BAD for you, its no wonder high cholesterol and constipation plagued my people.

Now to the first thing.  Molly refers to her loved ones as “My Jake” or “My Sammy.” I want to make it clear that all of her introductory anecdotes are perfectly charming and endearing. The broken syntax of EASL (English as A Second Language) served her well. I discovered that Molly’s alter ego, Gertrude Berg, had actually gone to Columbia University to study playwriting.  The fact that all of her quaint observations and Shtetl mentality were a complete contrivance added to my fascination and admiration for this woman. The guileless Molly had the circuitous wisdom that offered sage advice when dealing with sticky social situations.

“My mother-in-law, Jake’s mother taught me a trick. (Referring to a Cabbage Soup Recipe) To her it was more than a trick, it was a confidence.  When she told me her trick I was flattered, but how could I tell her that’s what my mother did also?”

“This soup really comes from Russia, but my friend Mrs. Wiersma says it’s Norwegian, and why should I argue? She says she got the recipe from her aunt in Oslo and I got mine from my grandmother that lived in Novgorod, and that’s not in Norway. So what’s the distance between the two towns? Three doors down.”

She then has the graciousness to name the recipe after Mrs. Wiserman. The thinking of Berg’s character was consistently infused with a loving tolerance of family and mankind in general.

In the introduction, she states her reason for writing the cookbook;  “So how did I come to write a cookbook? I had to protect myself, that’s how. When I cook for my family, I don’t have trouble. But when someone, Mrs. Herman, for an instance, asks me, “How do you make this or how do you make that?” do I know?”

She further illustrates the dilemma of dictating her recipes to her fictional daughter Rosie.

“For an instance, when I make my pudding I let it bake for a jitney. How long is a jitney? Rosie timed me, and a jitney is never twice the same. It’s from when it begins to boil, to until it’s finished baking. And if I say “Throw an eye every however,” My Rosie says that means ‘stir occasionally.”

So fun. But, in the words of Isabella Rossellini to Meryl Streep in Death Becomes Her “Now A Warning.”  These recipes go from simple to nauseating, to incomparably artery clogging. Her recipe for Nahit (chick-peas) amounts to reconstituting dried beans.  You could also use a can opener, you should pardon the expression. It’s in the appetizer section along with, Baked Tongue Rolls, Grated Black Radish and Chopped Brains.  Yikes!

The nauseating should include Chopped Brains, but she can do better: Ptcha; Calves Foot Soup and Jelly.  Talk about an onomatopoeia.  Ptcha is surely the sound you make when you eat it. These soups are often the result of poverty cuisine and not applicable to today’s palate.  They remind me of an article I read about the stomach contents of a Paleolithic woman; grass and snails.  And she was livin’ large!

Finally, The killers….and the sublime irony is, this recipe is under Salads!  Mixed-Up Sunday –Night Salad, which contains hot dogs, salami, beef, eggs, pickles and mayonnaise!!!  She also tells the story of how beloved her Baked Tongue is by her family.

“My family loves a picnic and they are so impatient to eat I don’t even know why we bother to go. For each and every picnic I make Baked Tongue, never by request, but as an order from one and all and by the time we get to where we’re going, there isn’t a snitch left.”

All I could think about when reading this was ‘the breath and the gas in that car’.

This entertaining book has many terrific old world recipes (sweet and sour meatballs, roast duck, pumpkin tsimmis.)  However, the impression I came away with was that this highly educated woman, who pioneered TV sitcoms as we know it, who wrote, produced and starred in her own show for 20 years (that’s approximately 5,000 shows folks), who fought the Blacklist by insisting on not firing the actor playing her husband, had the time to bust her ass making these labor intensive meals for her family. She was an early archetype of a career woman who seemed to be able to balance it all.  Neat trick.