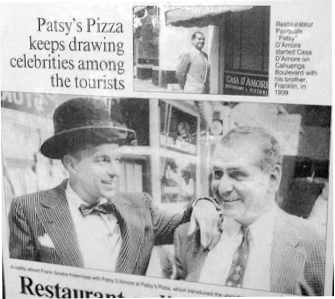 Part 1: The West Side’s Been Swingin’ Since the 60s

Carmine Competelli didn’t want to go into the ‘family’ business.  Even though, thanks to his dad Carmine Sr., he’d learned the restaurant business from the, er, kitchen, up. Sure Carmine’s had a rich and glamorous history.

Starting out in the 1960s there were only a handful of great Italian restaurants in Los Angeles. A few were owned by celebrities and their ‘business associates’.

The Villa Capri, Dino’s Lodge, La Dolce Vita, Casa De Oro and Sneaky Pete’s were a few of the places you could get a sensational meal and hang with your pals.  I remember all of these places because I’m a toothless hag.  I think Dino’s Lodge was also next to the infamous 77 Sunset Strip. Remember “Kookie, Kookie, lend me your comb”?

The jockey, Billy Shumaker and his bookie partner, Billy Karen, owned Casa De Oro, which is where Carmine Sr. started out as a bartender.  Carmine eventually met Patsy D’Amore who owned the Villa Capri on the strip. Good bartenders have their own following, which wasn’t lost on Pasty D’Amore who asked Carmine to come and work for him.

The Villa Capri was pretty much the “Actor’s Studio” for restaurateurs. Carmine worked there along with Maddie Mateo (Mateo’s) and Johnny Poletti (Peppone’s). That’s inevitably where he met Frank Sinatra and Dean Martin. Carmine was beloved by all these guys.  And once he became Maitre D’, he was one of those Maitre D’s that was a celebrity unto himself.  So much so, that when he decided he wanted to open a place of his own, Frank and Dino helped him out.

The site for the first Carmine’s? The Casa De Oro.  How’s that for a conquering hero?  It was a little tricky too.  Frank had opened his own place at the corner of Beverly Glen and Santa Monica Blvd.  Frank’s place, Puccini’s would have been in direct competition with Carmine’s, but Frank gave him the OK.

Puccini’s, under the management of Hank Sanacola (Frank’s manager) went out of business so the Rat Pack crew migrated to Carmine’s.

Sports celebrities, comedians, politicians, actors and of course, THE Rat Pack (“The Clan” or “The Summit” preferred by the guys themselves) made Carmine’s their home away from home.  Not just locals.  People from all over the country. But you could count on the regulars: Shirley MacLaine, Judy Garland, Lauren Bacall, Ronald Reagan, Governor Jerry Brown with Linda Ronstadt, Robert DeNiro, Milton Berle, even little old me.

In 1976, my boyfriend at the time, Andrew, gave me a surprise party at Carmine’s.  There’s a photo of us at a table with our arms around each other.  In the background, the other customers are hiding their faces with their menus.  I thought nothing of it at the time, but years later, my friend Susan Berman, daughter of Davey Berman (Bugsy Seigel’s partner in Vegas) told me Carmine’s had to be a mob hangout for that to have happened.  Who knew?  All I knew was I LOVED the food.

The recipes came from all over.  Carmine Sr. brought some from the old neighborhood on Mulberry Street.  Spinach Croquettes, Polenta with cheese and mushrooms (Mommy, Mommy). There are even dishes named after famous regulars. Shrimp Judy, which are large shrimp, lightly breaded and fried, served on a bed of fettuccini toped with medium spicy tomato sauce and mozzarella cheese.

Or Chicken Dino; a chicken breast with Italian sausage, potatoes, onions, mushrooms and green peppers. Carmine Sr.’s wife made major contributions to the menu with recipes that literally come from ‘the old country’. Their marinara sauce is hers and I can’t tell you how many times I’ve begged for the recipe…but you know, they’d have to kill me…

Carmine’s childhood wasn’t what you’d call typical. Imagine if you will, land purchased out in Granada Hills.  On 3/4 of an acre, the Competelli family grew everything they ate. As a kid growing up, Carmine Jr. describes it this way: “We only ate seasonal food, indigenous food.  That’s why everything tasted so good.

Chickens and rabbits would wander through the kitchen and most of my friends thought they were pets.  One day my Mom pulled me aside and said, “Listen, if your friends ask you what happened to “Fluffy”, you just tell them he ran away.”

Carmine Jr. isn’t very old.  He’s in his late 30s.  Yet, right here in Los Angeles, he’s had an old world culinary upbringing. It’s hard to believe that he’s borne witness to a restaurant scene of legend, not to mention the legends that ate there.

The Captain’s Cart, which is still practiced at a handful of restaurants, was a pomp and circumstance Carmine recalls with wonder.  Not only for it’s flourish, as anything from Caesar Salad to Veal Marsala was prepared table side, but for the fact that you had someone prepare it, someone else place it on the table and yet someone else bus it.  “Nobody could afford to pay a staff like that today.” Carmine says.

Yes, and there was a time when Amy Ephron and I drank from the Lemonade Tree at Uncle Bernie’s toyshop on Rodeo Drive.  Sigh.

There is so much to tell about Carmine’s journey to become the restaurateur he is today.  That’s why I’ve decided to tell his story in installments.  Next up; stories of The Rat Pack, or How Dean Martin became Carmine’s Godfather….you should pardon the expression.  And how Alec Baldwin was responsible for inspiring Carmine’s II.