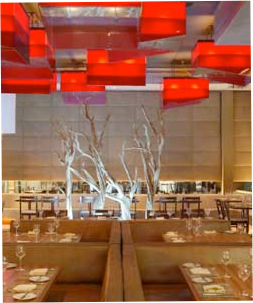 My idea of a good time is dragging my sorry ass up the stairs after a long day, plopping down on the bed, snuggling with my husband and watching re-runs of Law and Order or, if God REALLY loves me, a NEW episode of Real Time With Bill Maher. This 4 star vacation is earned after a day of schlepping kids, policing homework and of course the dance of death known as feeding everyone.

I’ve lost the will to live at that point, so preparing food for myself is out of the question.  I hastily eat something over the sink or bring things up to the bed that can be dipped or combined such as pesto with bread and diet coke, or Cheezits and Cranberry Juice. Oy.

Everyone I mentioned this to beforehand reacted as if I must be dancing a jig. I would nod vacantly as if I agreed it was gonna be a real party with the rug rats gone. But the fact was,  Chad and I barely remembered what it was like to be without kids.  “Our whole lives were HAVE TO”.   Twenty years ago our friends Rodney and Lindsay, who chose not to have kids, made up a song that lists all the fun, spontaneous things you can do if you don’t have kids.  It’s sung to the tune of Land of 1,000 Dances. (I made these up because they couldn’t remember any of theirs)

You get the idea.

There’s also the fact that I knew I’d miss them terribly.  And I did. My husband and I were bereft. We’d be sitting together in the living room. The house would be SO quiet.  Just the dogs looking up at us, panting, and the sound of the clocks ticking.  It was kinda like a Harold Pinter play but without the comedy.

But then, we turned a corner. We flew in the face of our former grief and danced in the living room in our underpants.  And we dropped everything.  And we went to the movies.  And then…we went out to dinner.

Chad took me to a restaurant some of his associates had taken him to. Boa in Santa Monica.  Since we were being spontaneous, we didn’t have a reservation. I don’t recommend this. I was also wearing something as close to pajamas as I could get without looking like I was wearing pajamas.  I took one look at the Maitre d’ and assumed I’d have a problem. A well-dressed, extremely handsome guy that looked like he’d gone to the Studio 54 School of Accommodating Drop Ins.  Now, remember, nobody under 40 knows who the hell I am.  Or, if they find out I was on Saturday Night Live, they usually ask “were you on when Eddie Murphy was on?”“ I meekly approached the desk.  “I know this is crazy, we have no reservation, I can see you’re really crowded, but about how long would the wait be for a table for two?”

The guy broke into a large, friendly grin.  “Honestly, around 40 minutes, but I’ll see what I can do.”  You never know about people, do you?

I sat on the long, cushy bench and people watched while Chad found a parking spot and I looked over the menu. Talk about eclectic.  I loved this chef! He just did whatever the hell he wanted with the spirit of a kid and the sophistication and knowledge of a world class cook.

Our wait was more like 20 minutes and we were shown to our table by the hostess, who, again, looked like she came from a casting call for Gossip Girl, but with the same friendly demeanor as the Maitre d’. Boa’s interior design is very slick. But its modern features use natural materials for everything.  Wood counters and tables and leather seats.  Homey and spare at the same time.  Cool, eh? There were some gen-ex types on one side of us and a burly ex-football coach with, I’m pretty sure here, his daughter on the other side.  Mr. Burly had a mound of blue cotton candy on his plate. Everyone was staring, with admiration and wonder.  Admiration that he had the balls to order it, and wonder at it’s towering…uh….blueness. I knew that was in my future.

This place presented me with nothing but dilemmas.

My appetizer dilemma was whether to have the Kobe Beef Corndog, Goat Cheese Baklava or Truffle Nachos!  It was tough, but I went with the Baklava.  Insane.  Flaky filo dough with pistachio nuts and warm goat cheese that held together when you bit into it.

They have a section on the menu entirely dedicated to potatoes, as any good steak house should.  However, this was no fair. Impossible to decide. Mashed or baked? Should I top it with lobster butter or truffle butter? But I can’t miss out on horseradish potato gratin! Hell!  Damn you Boa, damn you!

Rubs and sauces were offered and you could have more than one choice. Good thinkin’ on their part.  My choice of steak was easy since the idea was to make room for that cotton candy.  I had the petit filet.  Like butta.

When my cotton candy arrived, it looked bigger than I remembered it being on Mr. Linebacker’s plate.  All of a sudden, I was scared.  I was worried people would think I was trying to look younger by ordering it.  It wasn’t like I was one of those “over 50” dames with the muffin top spilling over her too tight True Religions. Or the woman who looks like a babe from behind, but when she turns around, is a screaming skull.

I’m a really tired, ‘over 50’ mother, writer, performer, and wife who got a long needed break. My husband and I hadn’t been on a date since neither of us can remember, let alone tried a new restaurant.  The fact that Boa was such a thrill ride and SO good, made it that much more memorable.