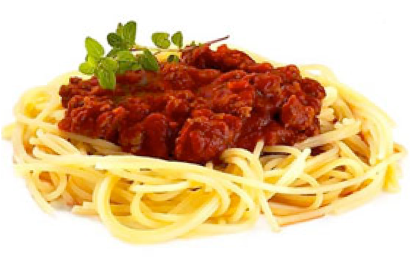 Jane Curtin, my former colleague on Saturday Night Live, characterized school cafeteria food in a way I’d never thought of. One day, on the set, I was waxing poetic about the fact that I loved the stuff. I think Spaghetti Day was my favorite.

“I don’t know what it is. It was pretty simple. Tomato sauce with ground beef and noodles. I usually had chocolate milk with it. You know, the holy trinity, savory, starchy and sweet. It was just so… divine..”

“Oh, yeah.” Jane said, as she tugged slowly on her cigarette. “Institutional food”.

I pictured all the movie close-ups I’d seen of miscellaneous slop being slammed on to metal trays in various pre-riot prison scenes. Some burly lifer upends the new ‘fish’s’ meal. But what he doesn’t know is, the new “fish” was often Jean- Claude Van Damme or Chuck Norris. Usually canned corn and peas, white bread and mystery meat. Probably saltpeter as well.

But that wasn’t the fare Our Bearded Ladies of the Hairnet served us at Hawthorne Elementary. Jell-O would come in perfect crimson cubes, topped with whipped cream.  A chocolate pudding day was a day nothing could go wrong. Puncturing the dark skin on top to reveal the lighter, fluffier comfort food underneath could sometimes make up for the C- I got that day in Math.  Don’t get me started on Fish Sticks with tartar sauce and tater tots. Hoo yeah! Institutional food.  Food produced on a large scale, but I have to believe that there were aspects of school food that was just different.

Both of my daughters attended private school for most of their educational careers. This meant tedious forms to fill out that locked you in to a menu offering little choice. The stuff looked good on paper. But the kids would come home and tell me the real story about their penne with butter and Parmesan. “Ewww, Mom, it was totally gross. I threw mine on the ground and it bounced!” Having served some of these “Hot Lunches” I can tell you that it’s a tough job, catering this stuff.  I don’t know why anyone would want to do it.

Their hearts were in the right place. But because they were trying to provide something healthy and nutritious, they were constrained to bogus approximations of delicious sounding things that they couldn’t possibly deliver on.  I don’t care how marvelously you’ve adapted Chinese chicken salad, or veggie burgers there’s a big problem. It has to travel. Yes, folks. Because there are no cafeterias at the private schools, shredded lettuce for the salads arrive limp. The veggie burgers, even drier than their original incarnation.

Recently, my 13-year-old daughter Hannah transferred to a public school with a cafeteria. I was thrilled with the prospect of ‘Lunch Money”.  It meant Hannah had choices.  Sadly, I discovered the school had an online system for payment called “Lunch Box.” Oh, well. Hannah was skeptical. She had many friends at the school already and one of her closest friends told her he never eats there because the last time he did, he threw up.

“If you think I’m packing you a lunch every day, you’re nuts. I paid my dues. Remember?”

I’d make their favorites sandwiches and then take cookie cutters to form them into playful shapes. Heart shaped cheese slices and scrupulously trimmed fruit would be lovingly bagged. All these things would return, uneaten and flattened by books and oozing from the heat of the day.

“I’ll pack my own lunch every day Mom, I promise.”

“Yeah, we’ll see how long that lasts. Just because Sonny threw up doesn’t mean you will. Give it a chance.”

The first day we set her account up, she didn’t use it. “What? You just starved?!”

“No, everyone just gave me some of their food.”

That was kind of neat, I thought.  No Lord of the Flies there.

The next day she came home from school, I asked her again. Her eyes got wide. “M-om, they’ve got BAGs of water ?!”

She was appalled. I think somehow the ‘bag’ represented a deprivation she’d never seen before.

She raised her eyebrows and shrugged.

“Yeah. It was really good.”

So, my little gal not only rose above her shock and bewilderment over the ‘bag’ ‘o’ water, but she went was willing to give the whole situation a try.

I’m glad she’s going to have the privilege of ‘institutional’ food.  Of course their mission statement is all about this nutrition, balance and portion size hooey. Poor thing.