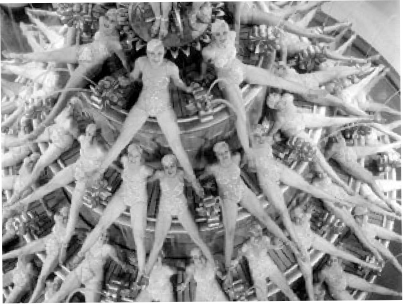 During the Great Depression, Hollywood did its part by providing people with the ultimate escape. It didn’t try to provide its audience with everyday situations that just reinforced their misery. Sullivan’s Travels made that point brilliantly. Instead, Hollywood gave them fantasy and opulence. The glamour of the Busby Berkley movies, the optimism of Shirley Temple; all these movies were a respite from the bleakness that awaited them when the lights came up.

Nobody wants to admit that the country might be facing a depression. At the very least, right now, times are tough. That’s why, when I tell you about Gold Class Cinemas, you must understand the spirit in which my husband Chad and I went. First of all, we were invited by our friend Nigel, who is already a member and was very excited to see our reaction to the whole experience.

We were to see Iron Man 2 and the theatre was in Pasadena. When I went online to check it out, I saw that there were, what looked like big orange Bark-a-loungers with smiling people resting with cocktails.  Hmmm.

The theatre resides in The Alley. That’s in Old Town Pasadena, which was my beat for about two years when my younger daughter was doing All Star Cheer. Right off Colorado Boulevard, The Alley opens up to a large square that has shops, Il Forniao, Sushi Roku, and other great places to eat.

I used to go to the theatre that is now the site of The Gold Class. It is underground, which always gave me the heebie jeebies, but I didn’t mind this time. It somehow lends an air of exclusivity to the whole experience.

You’re escorted to a lounge at the bottom of the escalator where you can order drinks and given a three-course menu you can order from to be served at proper intervals during the movie. I’d already had lunch right before I got there, so I chose the Bleu Cheese Potato Chips from the appetizer section.  My husband chose the lobster rolls, the artisan pizza and the chocolate and peanut butter mousse. You can start a tab there too, in case you want to add on to your order during the movie. I did. I ordered the Death By Chocolate cake. Everything we had was terrific.

Inside the theatre, we went to our assigned seats. Kids were sitting in them. Some things you just can’t avoid. After giving them the boot (totally kidding) we were given a mini tour of the seat’s amenities. The very wide armrest to my right, opened up to house my purse. People, I can’t begin to tell you how much I dug this. It was completely out of the way, while being right next to me. It was protected from floor filth and theft. Yeah!

The chair reclined with the touch of a button. And not in the way that you have to push it by yourself and it still stops so that your neck it at an uncomfortable angle like most “comfortable first-class” theatre seats. This was a motorized recliner that went almost all the way back, but you still have full screen visibility because each row is tiered. I was able to curl up into any comfortable position imaginable and I did. There was an illuminated button on the side table to my left. That was how we summoned the silent servers to bring our added orders.

All in all, this is an experience you have to try at least once. Just know you’re going to spend a bundle. By the way, Iron Man 2 was a blast.