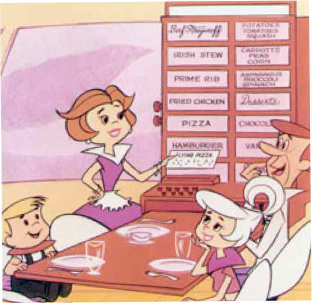 There are so many conveniences the Jetsons had that I could really use today.   Jane Jetson had this thing that came down from the ceiling, encased her head and presto! New hairdo! I hate doing my hair. My bathroom has all kinds of gizmos with one purpose; to make my hair look cute. You can’t imagine the work that goes into that. Flat irons, blow driers, round brushes, the Denman Brush, which is a plastic brush that grips the hair, pulling it taut, while I beam my Elcim blow drier at it. I blast it with the highest heat you can find on the market. God forbid there’s a hint of moisture in the air. My hair goes back to Israel before you can say Jiminy Cricket.

The conundrum of my hair is only surpassed by the puzzle of what to serve at the end of the day. The Jetsons had what really amounted to a microwave oven and TV dinners. I wouldn’t serve that even if I could.  This free-floating dilemma had me open my eyes one morning with what I thought would be the solution: A Slow Cooker! Yes! This promised a group of ingredients thrown together in the morning would greet me at the end of the day as a delicious meal that would put a smile on everyone’s face. The aroma  would lift everyone in the house and carry them all to the dinner table. The Berlin Wall of everyone liking something different would tumble down at the sight of whatever redemption stew I’d rustled up.

I went online to research the origin and possibly locate the master race of crock-pots.  All that did was confuse me.  My next move was to go to Bed Bath & Beyond where I ran into someone from my Temple who worked there. She had just been to a Crock-Pot Seminar (I’m not kidding) and said the Cuisinart crock-pot was the way to go. At $180.00, I was pretty circumspect. The Wall Street bailout had just been voted down and I sure as hell wanted to make an informed decision and knew this whole endeavor might be a crapshoot at best. The last bright idea I had was a panini grille which is now gathering dust in one of my cupboards because I don’t like cleaning all its parts.

My belief in myself and my common sense began to waver when Tony walked up.  Tall and black,

Tony had been using his crock-pot (a less expensive one) for the past 11 years.
“This is the Marathon. They invented the croc-pot so you know they’re good. I just throw a chicken and some vegetables in there in the morning and when I come home at night, I have something everyone at home just loves”.

I wanted to believe him. I did believe him. I just thought he must have some sort of magic touch, I’ll never possess. Like people who can do a piecrust.  Mine have the consistency of baked library paste, no matter how precisely I follow the recipe!

My crock-pot had its own little recipe book that came with it. None of them looked appetizing except for a sort of ersatz paella. I trotted over to Santa Monica Seafood and bought some beautiful fish to give my little miracle worker every opportunity to succeed. I followed the directions to a tee. You know what’s coming, don’t you. I fed my little miracle to the dogs. Nobody would go near it and I didn’t blame them one bit. For one thing, everything was the same color. The rice was sludgy and sad and robbed the fish of any of its individuality. But,  as Chad would say, I’m the Man of La Mancha of the kitchen, so I tried again.

This time, from a cookbook I’d had for a while that was nothing but crock-pot recipes. A recipe using veal shoulder looked like a winner, so I lovingly gave it  my all. While it was cooking, I began to notice a pattern with every recipe I’d looked at or tried. None of them contained any kind of fat.  Upon closer inspection, I realized the cookbook I’d had all this time was a Weight Watchers cookbook.  No wonder the roux for the dish I was making was made with water.  Well, I’m sorry, but it tasted like it. The stew was good, but it could have been great and again, no one would go near it.  As I’m writing this,  I’m using a recipe emailed to me by a friend who says she hates crock-pot cooking.  I put in an entire chicken from the Farmers Market, just to sprinkle a little fairy dust on it.  I can’t wait till I get home and try it.  I just hope that f*#@ing windmill isn’t blocking my driveway again.