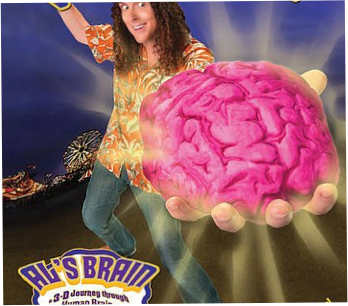 The Zucchini Weenie and Al’s Brain

My good buddy Al Yankovic invited a group of his friends to attend the premiere of his short movie entitled Al’s Brain….at the County Fair!! His invitation was sweet. It included the phrase “for those of you who feel like schlepping down there..”

The film was about the workings of the brain and had cameos from the comedy world’s elite, including Tim Heidecker and Eric Wareheim (Tim & Eric) Patton Oswalt (Brilliant Stand-up Member of Comedians of Comedy and the voice of the Rat in Ratatouille) and Thomas Lennon (Reno 911, I Love You Man) to name a few. This was a special event held at the Orange County Fair Pavilion where Al’s Brain will be showing for the entire run of the Fair.

During the event, which was private and the night before the Fair opened, we were treated to  “A Taste of The OCF”.

“I was stoked.  I’d heard the lore of fried snickers bars and, well, anything you can imagine being fried and on a stick, and I was game.  I took my daughter Lena and her boyfriend Bennie.
I’d always wanted to attend a traditional county fair and had gone to the one in Pomona. It was a long time ago and hardly resembled what I’d imagined from the MGM movies of my childhood. Pie Eating Contests, Prize Livestock, Atomic Produce and every other quaint American amusement were nowhere in sight. . Mostly, it featured a larger area of Carney rides and the ubiquitous fried wonders. Clearly nothing memorable as I couldn’t tell you one thing about it.

The Orange County Fair however doesn’t resemble my ideal either. They have a building that is situated on the very farthest field of the fairgrounds. If you’ve managed to run the gauntlet of fantasy foods and puke rides you won’t be seeing any kind of competition between family farms who’ve come from all over to show their prize bull or giant pumpkin.  The Farm, as it’s called is a perennial exhibit that has livestock and produce growing in order to educate young and old about the process of growing food.

Ah well. I guess I have to travel a ways for that.

Don’t get me wrong. The food and rides are worth going for.  I have taken pictures of some of the things offered. The rides weren’t open during our event but I really wanted to come back for them.

When we walked in, the first thing we saw as we passed a group of 4 men doing a percussive performance on plastic tubs, we saw a table that featured several  frying caldrons.  Next to them was a hose-like apparatus that was supported by brackets so it could stand upright.  The caldron and all the other accoutrements were adorned with piles of well-scrubbed new potatoes. They were making fresh potato chips and the hose thingy offered their homemade cheese and bacon topping.  How could they mess that up? They didn’t. It was awesome.

I knew we had to pace ourselves, which was hard because I wanted to devour all of it. The next thing I saw was what looked like a giant red covered wagon. It had a table set up in front of it that offered 3 different kinds of pulled meat sandwiches. Also, outstanding. Neither of these places had a line formed so it was instant gratification.  Not so with the fried Oreos or the Zucchini Weenies. They were at the same stand, so you can imagine how popular that place was. While waiting in that line, I could get a plate of cotton candy, churros, shish kabob and crepes.  The fried Oreo was underwhelming. There was no trace of the cookie’s personality left as it was ensconced in this doughnut fritter.  BUT, the Zucchini Weenie was AWESOME. Lena didn’t like it because it was a pork hot dog inside and usually I don’t like pork hot dogs either because they tend to be sweet and I like savory hot dogs.  IT didn’t matter. I can’t describe to you how good the combined tastes of the dog, the crisp (but well cooked) vegetable and the corn fritter tasted together.

I guess you’ll just have to brave the drive and the heat to find out for yourself. There were so many other food places that weren’t open that I wanted to try. Good luck.  Wear an elastic waistband. Oh, and thanks Al.