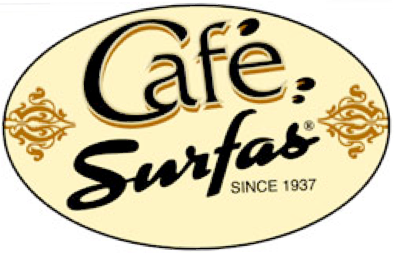 The other day, my daughter Hannah and I stopped by Surfas. It always surprises me when she wants to go there, since their prepared food is, lets just say..um..esoteric.  She ordered the 72 layer biscuit with ham and cheese and drank a Bubble Up. Oh to be 13, 5’5” and weigh 98 lbs.  After that, as we crossed over into the store, a fellow cradling a basket of hot baguettes narrowly missed running into me as he made his way to his station or should I say ‘kingdom’, because this guy rules!

Hannah and I watched him set up the baguettes and tend to a customer at the newly established Cheese Bar. If you haven’t been to Surfas lately, there have been some delightful additions to the whole experience.

David Rozansky is the cheese sommelier, but there’s no mistaking the modus operandi of a drug dealer who loves his product.  David looks like an old world chef.  Besides being tall and substantial, he has European features and dental work, or the lack of.  This isn’t a put down. I happen to like bad teeth on some guys.  I was surprised when he mentioned that he attended Crossroads School (which was St. Augustine’s when he went there).

In David’s hands, I felt like Pinocchio being led along into the world of The Lost Boys with promises of unrestrained pleasure.  First he sliced some of the warm baguette, and spread some triple cream Brie called Chateau De Bourgogne. Then he drizzled some truffle honey on top of that.

Hannah took one bite and shot me a look that said “this must remain in our lives forever”.  He went on to teach us the variations of Truffle honey on the market and which ones to buy to optimize the promise of that flavor. The brand I got had the adorable name Lulu White Truffle Honey

I guess our level of appreciation gained us entry into David’s ‘secret cheese’ club. He pulled out a wedge he had somewhat hidden in the case and gave us a slice with a Griottines Morello Cherry on top.  We sure felt lucky that day. I know I didn’t wake up in the morning imagining I’d get to taste a Griottines Morello Cherry.  I bought the wedge of ‘secret cheese’, but the cherries were a bit too expensive for me.

I ended up buying a quart of Bob’s Vanilla Ice Cream and Salsafragola All’aceto Balsamico.  (Strawberries in Balsamic Vinegar) to take to a poker game I’m going to tonight.  David also explained to us the distinction between Ice Cream and Gelato. Although I knew he was right, when he spoke derisively about ‘mass produced’ brands on the market, I thought surely Haagen Daaz was exempt from this category.

You can’t really put a price on the culinary ride David took us on.  I know the stuff I bring to the party tonight will make me look real cultured ‘n’ stuff.  But I have to say, knowledge can sometimes be a bittersweet thing.  Last night my husband brought up a bowl of Haagen Daaz strawberry ice cream for me.  When I was eating it I noticed a rather cardboard-y taste to it.  Also, I could barely taste the strawberries.  There was another flavor I identified as well.  Staleness.  It’s true. You can’t go home again.  I’d tell you the name of the ‘secret cheese’ but the label wasn’t on it.  I can tell you its goats milk from young ewes.  The first bite’s free.