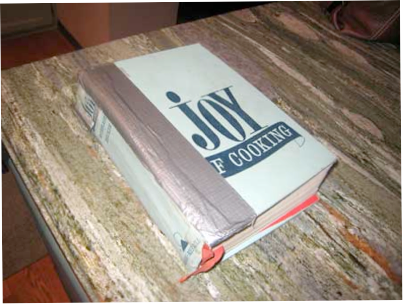 The Joy of Cooking

I have a 1932 copy of The Joy of Cooking that’s being held together at the spine with duct tape. The book, like so many things my mother gave me or tried to impart to me, has become a cherished item only years after her death.

I wasn’t that close to my mother. I know she loved me very much, but she was a talented woman who was bored to death with mothering (I have two older siblings) by the time my twin brother and I came along. I can dig it. I would have had more kids myself, but if I had to sing “Wheels on The Bus” one more time, someone was gonna get hurt.

So, she left me in the hands of Lola Mae English. Good thing. I have vivid and happy memories of growing up in her care. On summer afternoons, the sound of the local soul station KGFJ would underscore our lives together. When it was just her and me hanging around the kitchen, she would make us Lipton Tea with lemon and sugar, and Uncle Ben’s Converted Rice with butter and salt. Christ! When I think of that now, I can feel my insulin level doing back handsprings. Lola Mae cooked many things from The Joy of Cooking. This book is so old….. It has diagrams on how to butcher a squirrel. Seriously.

About Squirrel
What I’m about to impart in this essay is THE brownie recipe. Like Lucy, the Australopithecus from which all humans spawn, this brownie recipe from “The Joy of Cooking” is the point of origin for all brownies:

In a double boiler, melt
½-cup butter
4 oz. Unsweetened chocolate
Let this cool.
Beat together until light and foamy
4 eggs
½ tsp. Salt
Gradually add
2 cups sugar
1 tsp. Vanilla
While still beating
With a few swift strokes combine the cooled chocolate mixture into the eggs and sugar. Even if you normally use an electric mixer, do this part manually. Before the mixture becomes uniformly colored, stir in gently,
1 cup sifted all-purpose flower
Nuts are optional, but I feel they get in the way of the sugar fix.
Bake at 350°F, in a 9×13 inch pan for about 25 minutes. Cut when cool.
(From the 1932 edition of The Joy of Cooking)

Ah food and love. And laughter, I might add. Lola was funny. She had a kind of Wanda Sykes delivery as she laid in her put-downs of my mom, who inexplicably took it with good humor. I say inexplicably, since mom didn’t cotton to humor at her expense coming from anyone else. There were some instances of her put-downs, that only I was privy to. Once, when my brother and I were about 10, Paul slammed his drinking glass down on the dinner table, tipped his head back and bellowed, “more milk Lola!!” The swinging door leading to the kitchen was in mid swing so I could see Lola and hear her as she muttered “just a minute, I’m takin’ care of some of yo’ friends”…she was swatting flies. Another time, after mom had had a face-lift and was resting in her bed, I called the house and Lola answered. “Hey, can the Invisible Woman come to the phone?” Lola sighed and said, “No, the Bride of Frankenstein is sleeping, but I’ll tell her you called”.

My relationship with Lola was as close to having another mother as you can get. It was because of this familial feeling for Lola that I had the misguided belief that I was somehow touched with a magic wand that let all the black people in my life know that I was ‘ok’. That somehow, I had intimate knowledge of their experience.

When I was 15, in 1968, I was in an improv group, the only kid in a group of adults. As part of a citywide program to involve ‘at risk’ youth during the summer, our little troupe was hired to ‘do improv’ with audience participation, in the city parks. Naturally, we were in all the hot spots. Watts, Compton, the Barrio. At one of the parks, a very angry looking black guy wearing a black turban approached me. Evidently, he was part of a militant group at the time called, what else, the Black Turbans. I’d never heard of them, but I took this guy very seriously as he bore down in my face, eyes blazing with anger. “What you think you doin’ here? You think you helpin’these kids? All you doin’ is shoin’ ‘em somthin’ they can’t never do for real. They jus gone be disappointed.” I was too naive at the time to believe he could be right. What about Dick Gregory, Richard Pryor, Bill Cosby, Flip Wilson, Godfrey Cambridge? If I’d had any saliva left in my mouth, I might have said those things. All these years later, there’s someone else echoing pretty much the same message: Bill Cosby. By pointing out to kids that the odds are against them becoming famous rappers or pro athletes. Neither one of these guys was trying to kill kid’s dreams. They were just trying to get them to be practical. I wonder where that guy is now?

Lola has never told me what hardships or indignities she might have suffered at the hands of some white asshole. It’s hard to contemplate the possibility that my own family might have oppressed her in some way. Once, when I was a teenager, I was in the kitchen with mom, Lola and Ben, Lola’s boyfriend at the time. Mom was standing up and Ben was sitting at the kitchen table. He was trying to get her attention and she was talking over him. “Mrs. Newman, Mrs. Newman.” There was a sound in Ben’s voice that I’ll never forget. An imploring. I was thoroughly ashamed. “Mom, Ben’s talking to you!” My parents were all for liberal causes, but at that moment, my mom was dismissive and emasculating towards someone who was important to someone we loved, someone I loved very much.

Still, day in and day out, Lola presented our family with beautiful meals from “The Joy of Cooking”. Yeah, it was her job, but I got the realperks; her love and her friendship. Her wonderful sense of humor and her companionship.

How I love Lola, who now resides in Grand Prairie Texas with her husband Jimmy. She’s 89 and keeps insisting she has Alzheimer’s even though she’s never exhibited any signs of it in our conversations. Maybe it’s a joke at my expense.