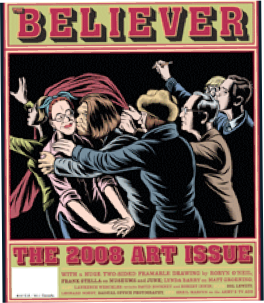 If you’re looking for a unique and memorable gift that keeps on giving, why not give a subscription to my favorite magazine: The Believer. This is the coolest magazine e-v-e-r! I get red in the face when I try to describe it to my friends so they’ll want to pick it up.

Me: “ Oh my God, it’s completely unique! For one thing, it has zero photographs or ads.  Every image is illustrated in a like, you know, graphic novel style? But Sedaratives is amazing! It’s this fake advice column….oh crap, you just have to read it!”

Sometimes The Believer has themes each month that come with, well, I think of them as gifts.  Once their theme was Art and the tear-out insert in the front had the most beautiful temporary tattoos. The Music editions have come with a mix CD that makes INDIE 103.1 sound like Top 40.

The articles have ranged in subject from phrenology, the history of flatulence, premiering Graphic Novels, short fiction by Michael Chabon, poetry, an article I thought should be made into a movie, written by Jason Boog on Arch Oboler, writer of many episodes of Lights Out, most notably, Chicken Heart, interviews, a regular column by Nick Hornsby called What I’m Reading or Listening To (really funny, edgy book reviews, what he started and put down, and what’s just sitting around because he never got to it but wants to) AND my all time favorite column; Sedaratives.

This was supposed to be a regular column by Amy Sedaris, but demands on her schedule made it hard for her to keep it going on a regular basis, so they’ve had guest writers ever since.  It’s a fake advice column with some of the funniest, laugh-out-loud stuff I’ve ever read. The tone of the humor is very specific. The letters seeking advice assume the guise of the clueless, gen-ex, slacker, without the ability to censor any of their craven self-interest.

The guest writers they’ve had have often been able to keep up with the tone. Maria Bamford, Todd Barry, Bob Odenkirk, Paul F. Tompkins, Zach Galafinakis, Amy Poehler and of course, Amy Sedaris. The exception, I’m sorry to say, have been actors or or comedy writers of an older generation.  That’s why I was so uplifted to see this month’s contributor hit it out of the park. I guess I can lay claim to Buck Henry since he hosted SNL so many times, so I will call him ‘our own Buck Henry’.

Writing humor is such a delicate balance. So many things can take it off course. Age, experience, what you’re exposed to, your interests. Listening to people in my age group talk about how they don’t ‘get’ today’s humor and how they don’t think its funny is tiresome to me. Unfortunately, ageism is often warranted when it comes to comedy writers and performers.  But Buck is an anomaly. If you saw To Die For, with Nicole Kidman, you would see the sublime way in which he captured each character’s voice and raisons d’etre.  It takes a lot of finesse to make a narcissistic sociopath funny, but he did it.  I will leave you with an excerpt from Sedaratives:

I just read Siddhartha to impress a girl, and I’m having trouble thinking of anything to say that would sound sufficiently deep but not too pretentious.  Any ideas?

Be careful. A woman who would actually request that someone she ostensibly cares about should read Siddhartha is intellectually ruthless if not criminally insane. This is a trap. You must realize by now that there is nothing that you or anyone else can say about Hesse’s novel without sounding pretentious, or even worse, foreign.  When I was very young, my great grand mother, who was old and ill, asked me to read her to sleep. I selected Siddhartha because I surmised that I was in her will.  She passed away during chapter two.  I was amazed that she lasted that long.