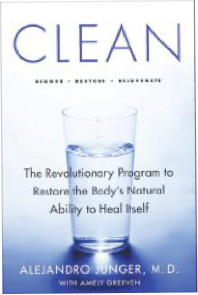 For years, as both my husband Chad’s and my weight have yo yo’d, I’ve begged him to diet along with me but we’ve never been able to be in sync with our willingness to trudge the road of deprivation. Until now. We email each other from different rooms in the house. (And they say Great Britain is in danger of having the laziest people in the world). The subject line in his email to me read: “yes, or no”.

It had a link to a newsletter called Goop, written by Gwyneth Paltrow. I know most so- called “celebrity diets” have to bear up under a lot of scrutiny. After all, what qualifies someone like Marilu Henner to give herself the moniker of “health pioneer” when her children’s cookbook, in the words of health writer Sally Fallon, “contain guidelines that are more likely to produce a variety of pathologies, including some kinds of eating disorders…”?

Well, Gwyneth merely presents what she’s learned from Dr. Alejandro Junger, a cardiologist and ‘leader in the field of integrative medicine’. I’ve never heard the term ‘integrative medicine’ but it seems remarkably intuitive in the context of wellness.

Also, this program is not a diet. It’s a Cleanse.

Paltrow’s narrative as she puts forth her own augmentation of the “Cleanse” as it’s called, is charmingly self-deprecating, empathic towards the reader and encouraging.

She lets us all know that she’s tried the hardcore cleanses in the past and they’ve kicked her ass, even though they’ve worked. And she discovered that those kinds of fasts could actually be bad for you. So she takes the bullet for us and we can just dismiss the ones out of hand that leave you looking like that emaciated guy from the movie Seven (hey, she was in that) and we can look all tough, as though we might have even considered it.

I must say, I’m a veteran of diets and I’m somewhat knowledgeable when it comes to nutrition but some things were new to me. The cleanse keeps you hyper hydrated, but not in an obnoxious, drink 7, eight ounce glasses of water a day way. Who is EVER that thirsty, for fuck’s sake? I was introduced to cocoanut water and smoothies and fruit and vegetable extractions and soups that not only satisfied my hunger, but they tasted delicious! The hydration served a very important function besides hunger abatement. It prevented me from having that coffee withdrawal headache that I fear so much, I initially didn’t want to do this thing. The food was so satisfying, that before I knew it, I had eliminated dairy, sugar, caffeine and wheat from my diet. Completely!! Never before has a system been able to defeat my cunning network of denial and rationalization.

Now, since this is a detox, I gotta tell you, there were some really dramatic side effects in the beginning. Since I knew to expect them and knew what they meant, the fact that they were somewhat unpleasant at times was downright uplifting. For instance, both my husband and I, at various times felt body aches, exhaustion, and lower back pain. After drinking something called Super Greens (a delicious juice from my extractor consisting of celery, fresh ginger, kale, pear and lemon) I immediately experienced a jolt of pain running through what I’m pretty sure was my spleen, but could have been my liver. Maybe those organs were jumping for joy? Chad said at one point, he felt like needles were stabbing him on both sides of his pelvis.

We must have been pretty stuffed with poison, that’s all I can say.  But this was short lived and after only a few days we felt invigorated, calm, well rested and yes, by golly, we lost weight. Other symptoms of progress involve elimination but that would make people way too happy to read about, so I’ll just let them experience it for themselves. There are some foods conspicuously missing, like strawberries, potatoes, bell peppers, asparagus and tomatoes. That’s what I meant when I said I thought I was knowledgeable. Evidently, some of these are in the family of nightshade and can cause inflammation. I tell you, this stuff is deep.

Gwyneth Paltrow recommends Dr. Junger’s book in order to understand the science behind all of this and I’m in the process of reading it now.  Some of it is annoyingly redundant, but the brass tacks of it are fascinating and worthwhile.  I’ve subscribed to Paltrow’s newsletter, which is abundant with topics of fashion, food, activities, spirituality etc.  What a gal. Thanks Gwyneth.