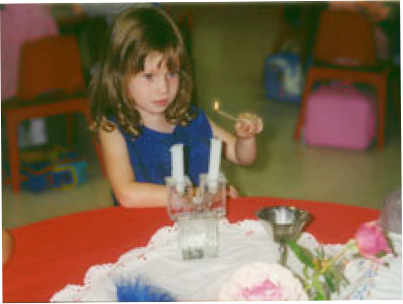 I’m a California Jew. If one were to compare ethnicity in terms of packaging, we’d be ‘plain wrap’. Both my folks were Jewish, but Mom was an Atheist and Dad, well,  he grew up in the little town of Chloride Arizona and  Grandpa Harry was the Sheriff.  Once, when I was a kid, I brought a stray cat into the house. Dad hated cats. The center of his face turned purple with rage. “You git that ornery varmint outta here!”  Get the picture?

Then I met my salt of the earth, “Philly bro” husband who promised his father on his deathbed that he’d have his kids bar/bat mitzvah’d, what the fuck was I gonnna do?

I joined a neighborhood Temple. By the way, our house is literally straddled by Temples. Sephardic (the building and the inside is breathtakingly gorgeous) the Conservative and the Reform. Guess which one we chose? Also, it had a renowned Mommy and Me program.

When we attended the first Shabbat as a family, I was nervous.  I wore a dress. That was me ‘towing the line’. I didn’t know what to expect.  What I liked about our Temple was that it was modest.  Still, I was worried  my uncouth manners would make me an outcast OR get us kicked out.

As Chad and I were hurrying across the street to the Temple, I said “Now look, we’ve got to be really, uh, you know, polite.” “What’re you talkin’ about?” he said. “You’re the one with the sailor mouth.” It’s true. You hang around Comedians long enough….

The first person we saw inside was my Agent.  Then, the Cantor came up to Chad and said “Aren’t you in The Groundlings?” Wha…???? Chad was in the Sunday Company at the time.  “I took a song improv class there and I think I saw your picture on the wall.” The Cantor took a song improv class???? ……Cool. (Eventually, my daughter Lena made her stage debut in Canter’s Chanters Hanukkah Extravaganza as Latke # 4)

What can I say?  This was a ‘hamish’ place. It was a ‘Shidech.”(Yiddish for love match) The Rabbi, Bob Gan, had the demeanor of an undertaker, but he revealed himself to be wise and endearing.

The Mommy and Me was run by Susie Leonard.  For all of us first time mothers, with no “village” in sight, she was our Guru.  Everything that baffled us about parenting was swiftly handled with confidence and firmness.

“I know you want that truck Jacob, I know you want it” nodding her head empathically as she’s grabbing it out of the iron grip of a 2 1/2 year old who is screaming his head off. “But Dylan got it first. When Dylan’s finished with it, you can have it”.  Man, it was rough justice and we loved it and we loved her. AND, because this was a Temple, on Fridays we did Shabbat.

AND this is where I learned to be a Jew.

I learned the songs and the prayers along with my young daughters. There was nothing more moving than to see these little kids take these mystical rituals in stride. They were born to it, so to speak.  It was like thinking French kids were so smart ‘cause they could speak French.   My desire to support them motivated me to join the Religious School Committee.  More specifically: The Tot Shabbat Committee. This involved a food and art project on Saturdays for a kid friendly service. This thing was brilliant.  10 minutes of a ‘service’ followed by, oh, cookie decorating and cotton balls with glitter. As long as you could rope in a Jewish theme to it.

The  Tot Shabbat  was held in the Social Hall so we could eat and have room to sit on the floor.  Rabbi Gan would sit with the kids all around him while he delivered his, um, sermon with the help of a puppet named Josh (who sounded exactly like Rabbi Gan) and a guitar playing Cantor Kent whose pure tenor still reminds me of every Broadway show I’ve ever seen.   But the kids didn’t listen. They interrupted; they ran around, they played, laughed, screamed. They did everything but take a shit in the middle of the floor.  But, to Rabbi Gan’s credit, he never broke a sweat.

My favorite food project was Simchat Torah. We were going to make edible Torahs. Hmmm. I’ve got it!  In assembly line fashion I had the kids take two large stick pretzels and a rectangular sheet of Lavosh.  They slathered some vanilla frosting all over the Lavosh (it served as a kind of glue) placed the pretzels on both sides, rolled them towards each other, leaving room for the ‘words”(mini chocolate chips scattered randomly which is what Hebrew looks like to me).  Then they rolled the Torah together and tied it with a string of red licorice.

I embraced every holiday at home too, and it became a passionate quest for me. I would reach out to my unknown relatives from the past and connect with them by using old world products like Streits or Manichewitz. Making desserts with potato starch and matzo meal for Passover.  Using real schmaltz. Making my own chicken stock. I felt that cooking these dishes somehow initiated a return to, at the very least, our Jewish culture by my family. The smells in the house and the tastes became things the kids begged for.  I was making memories for them.  Good ones. It was inconceivable to me that my brisket would become ‘Aunt Laraine’s brisket” or “Mom’s brisket.” In my heart, I was Amy Winehouse (except I did go to rehab),  but on the outside I was becoming Mrs. Wineberg and not only was it ok with me, I was really digging it.

Then came the latkes. Boy did I have a lot to learn. Well, basically, you gotta squeeze the living daylights out of the shredded onion and potato and you HAVE to grate it. You can’t put it in the Cusisinart. If that aint love, I don’t know what is.

Years later, I asked Rabbi Gan if it bothered him that the kids ran wild during the service. He smiled his small sideways smile and said, “ if they act like that it means they feel  comfortable here. That’s what I want.  I want them to feel like they can be themselves at Temple. Like it’s their other home, because it is.”  Amen brother.