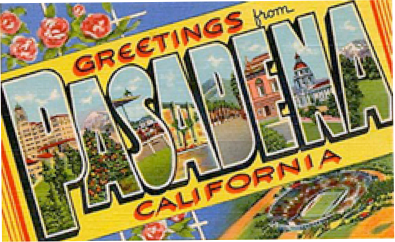 Two times a week I have to find stuff to do for several hours in Old Town Pasadena. This is a part of Pasadena that is, well, the oldest.  If you can imagine any part of California old, this is it. Many of the ‘old money’ resides here and the architecture reflects the Spanish influence tinged with

Victorian and Craftsman flavor. The reason I go is because my daughter Hannah is a competitive cheerleader. Not the kind connected with a school. She’s too young for that. The kind from Bring It On. The kind you see on ESPN. My little Westside dolly is the one they throw up in the air. The one who brings her leg back to touch her head while being hoisted aloft.  Frankly, I’d puke if I ever had the guts to get up there, but she’s tough and fearless.

If you attend one of these competitions, which I’ve done for many seasons now, you hear sped up hip-hop for hours on end. I actually like hip hop to some degree, but after hours of it, I want to kill myself. This past season, her team; Explosion, had a sixties theme, so their music was a mash up of Sam and Dave, Buffalo Springfield, The Beatles, The Monkees, Steppenwolf etc. It was fabulous and they took first place nine times out of the eleven times they competed. Obviously, not because of the music, but because they ‘stuck it’ every time.

When I watch the Olympics, I’m reminding of the tumbling passes and stunts my baby does every season.  She’s a stud. Victory Cheer Company Gym, where they practice, is in Pasadena. I guess nobody on the Westside has any spirit. It’s strictly off limits to me because I’m an endless source of embarrassment to her during practice. The problem is, I really like hanging out at the gym. Her coach, Patrick is a riot and the owners, Thomas and Amanda Wade, besides being athletes and cheer pros who have changed my daughter’s life, are sophisticated moviegoers and foodies. Both subjects are near and dear to my heart and I constantly have to dodge the landmines of dirty looks from Hannah because I’m ‘lingering’.

However, I can just as easily be an awestruck tourist in Old Town any time I leave the gym. I’ve been slow to investigate as much as I could have because I’m someone who could literally get lost in a parking lot. I’m not kidding. It happened to me once in Connecticut when I was trying to get back to my hotel. The parking lot was adjacent to the street that ran alongside the hotel, but I couldn’t find the exit.  I ended up crying and banging my head against the steering wheel until Chad came to get me. I don’t know what was worse; the humiliation (plus what I imagined to be previews of dementia) or the look on my husband’s face that I could see through the windshield. Shaking his head, and smiling in that loving, yet condescending way.

Between articles in the paper, nudges by Amy (Ephron) and suggestions from Thomas and Amanda, I’m never at a loss for places to eat. Old Town is a gold mine for me any time I want something to write about for One For The Table.  It’s actually a problem.  As I’m driving away from one fabulous place, completely stuffed, I see another place that I can just tell is superb, and damnit; I don’t have enough room for it.

Thomas and Amanda have been telling me about Euro Pane on Colorado Blvd. for months and I’ve had countless conversations with them about food and places around town and they always end up urging me to go there. Amy wanted me to go to Pie and Burger and when I mentioned this to Thomas, he shrugged and said, “I ate there all the time growing up. Its right next to the school I went to. Do you like Lemon Meringue Pie?”

“Sure, I said” forgetting that it had to be a kick-ass one or I was out!

“Then have a burger and a slice of the Lemon Meringue Pie, but you really have to try Euro Pane.”

I had this fantasy that I’d be able to go from one place to the next, but no such luck. I was just too stuffed afterwards. I grew up eating at the Apple Pan, and Pie and Burger is in the same family, but I must say, I prefer Apple Pan burgers. However, Thomas and I have engaged in some serious conversations about piecrust and Pie and Burger’s crust is unbelievable. The trick is, you have to sell your soul to the devil because clearly, it’s made with some kind of lard. What the heck, you have to try that once in your life, right? The décor is kind of log-cabin-y with a counter that swings around a hearth like grille. The stools are the old fashioned posts with leather discs and an old-fashioned Waring Blender is at several stations. The hostess uniforms are also completely ‘Flo’.

Two days later I finally got my ass over to Euro Pane. The façade is innocuous, but inside it’s really lovely, with a very hip color scheme and rustic displays and shelving. They make all their own breads and everything is presented beautifully in this little café. Pastries, a bowl of fresh peaches and a cold salad case with lentils, curried carrots, salads, and sandwiches looked like what you’d get if you sent Whole Foods to Paris for a summer. I had an open- faced egg salad sandwich on olive bread.  The sandwich had fresh chives snipped on it and a unique flavor that I couldn’t put my finger on, but it was good.

Then I ordered a chocolate tart. It was round with an almond colored crust. When I bit into it, the crust dissolved like the most elegant shortbread I’d ever had. It wasn’t too sweet which was great because the filling was almost like a ganache.  Yeah, the Wades are my gurus, there’s just no doubt about it.  They also sent me to Smitty’s on South Lake Avenue.  Their menu reminds me of a variation on trends I’ve seen recently of well-made, American comfort food.  Macaroni and cheese, steaks, meatloaf, fruit crisps.  All things I love, all things made extremely well by Smitty’s.  So many restaurants, so little room in the tummy.  What a hardship.