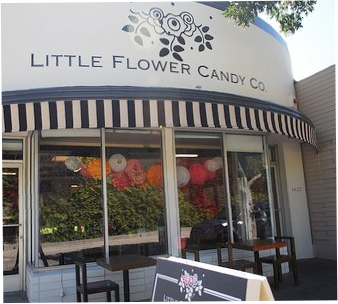 I go to Pasadena often because my younger daughter’s cheer team practices there. Yes, I spawned a cheerleader because my parents don’t have enough to laugh about in heaven. It’s given me a chance to explore Old Pasadena and I’ve been loving it.  But the fact that “Of all the Gin Joints” so to speak, I mean that Little Flower Candy Company just happened to open a bakery in Pasadena was just dumb luck for me. The building is an art deco cubby that reveals itself as you’re zooming along what looks like a residential area. Pasadena is funny that way.

I want Christine Moore to be my mommy. She’s the owner of the Little Flower Candy Company in Pasadena. She makes those sublime caramels and wondrous oversized square marshmallows you’ve seen at places like Joan’s on 3rd and Clementine. But the reason I want her to be my mommy is because she told me she had a sleepover for her eight-year old daughter and six other little girls at her new store on Colorado Blvd.  Floating on air mattresses with the aroma of baked goods and candy as the ambient scent they probably laughed their guts out before they drifted off to sleep, only to be awakened the next day to hot chocolate and croissants. Then it was a hop skip and a jump to the Rose Parade. I’m so very there.

When I think of the time I waited in line with my daughters at the Virgin Megastore so we could meet The Darkness (a really terrific British metal band) and the fact that it was freezing as we inhaled the exhaust from the zooming cars on Sunset Blvd and the only laughing we were doing was overhearing the conversation of the two metal heads next to us:  “I think my tongue stud is infected”.  “Just gargle with rubbing alcohol.” Jesus!

I wanted to find out all I could about the place without looking like some foodie/stalker OR, God forbid, someone might think I’m just posing as a food writer to get free stuff, and it takes every ounce of bravado I can muster just to forge ahead like I know what I’m doing. Christine Moore took me at my word and gave me a tour.  She seemed delighted which gave me more courage to, like some groupie,  tell her how much I love her candy and how excited I was that she opened a store.

“I’m really a baker.”  Christine said.  Actually, she was a baker at Campanile!!! “When I had my first baby I was bored at home so I started to experiment with candy.” “Rats!” I thought. “This chick wasn’t even trained to make candy.  She just improvised and she’s THAT good”.  One day I’ll forgive myself for not being extraordinary.

Christine’s husband just recently decided to stay at home with their three kids to support her in the business. He’d been the Executive Chef at Dodger Stadium for 6 years. I’ve heard of guys giving up humdrum jobs, but nothing like this. Then, there’s John or as he’s called around the bakery, “cute John”, and I have to say, that’s an understatement (cute, as in Abercrombie model cute).  He was the sous-chef at Dodger Stadium.

Browsing the bakery case, I noticed these cone shaped packages of what looked like white meringue cookies, but they turned out to be marshmallows from Europe.  They looked like fat little babies with outie belly buttons. There was an impressive coffee cake on a stand and one ginger snap, lonesome on a doily. She’d clearly been cleaned out that day.  I decided it was my professional obligation, you know, as a uh, food writer,(yeah, right) to sample everything I was interested in.  I chose a slice of her coffee cake (superb), the ginger snap (normally my favorite cookie, hers are in a class by themselves) and a bran muffin she said had very little sugar in it.  I also bought a beautifully wrapped bag of ribbon candy.

I must say, the bran muffin took me by surprise.  When I first tasted it, I located the flavor of orange peel. Things like that, or alcohol in any kind of food immediately feel like some sort of punishment to me.  But as I kept eating it, the flavors got together and this was one of the moistest, lightest bran muffins I’ve ever had.  I must have more. The coffee there is also rich, without a hint of bitterness and I can absolutely see myself hanging there in her industrial meets craftsman décor. I noticed a lot of kids hanging around too.  She knew all of them by name.  I wonder if they know how lucky they are?