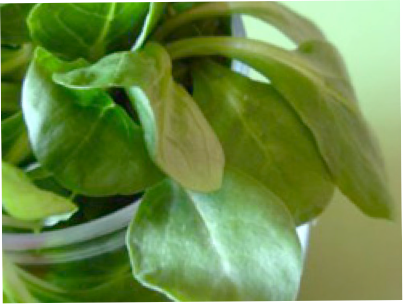 Mache Is the New Romaine

Have you seen that commercial that uses the Hall and Oats song “Baby Come Back”? The mop has been replaced by the sexy and efficient Swiffer and it’s  kinda stalking its erstwhile owner?  I think Romaine is going to be doing the same thing.  I’ve noticed that Mache started out as a green you could only find at the farmer’s market; Kenter Canyon and the like. But now, I’ve seen it at Trader Joe’s, Gelson’s and of course, Whole Foods. The label says ‘enjoy the nutty flavor’.  Lettuce? Nutty? Right on!

I looked it up and saw that it’s a powerhouse of nutrition and it’s other and more commonly used name is ‘lamb’s tongue’ because its shape resembles it.  Isn’t that adorable?

Now, lets get to the reason I’m pissing on your leg about this.  My 17-year old likes it! Now I have to say, there was a very important lubricant that ushered Lena over to the land of green: Joan’s on 3rd’s Vinaigrette.

I was looking in their prepared foods section and saw these large tubs of dressing. Green Goddess (Authentic) Ceasar, Lemon and Mustard Vinaigrette and so many others to choose from and I wanted them all. I decided on the plain Vinaigrette but  I hated the idea of taking something that expensive home and possibly not liking it, so I asked Joan if she had a smaller size.  She gave me a little container and told me to taste it. How is it possible to make something taste so spectacular?

How is it possible to take the same ingredients and have it come out like something you bought in Shangri-la?

When Joan saw my eyes bulging she said “you know, when I had my restaurant in New York, this dressing was so popular. One night I took it home and tasted it and thought, “wow, that’s really good!”

So, you had never tasted it? Hmmm. It’s a mystery within a conundrum. But no matter. You have to have it in your house all the time.  That, and of course, the mache, when it’s in season….which is only when the lambs are ‘lambing’. Isn’t that adorable?

Laraine Newman is a founding member of The Groundlings Theatre Company and an original cast member of Saturday Night Live.  She lives in her hometown of Los Angeles with her husband and two daughters