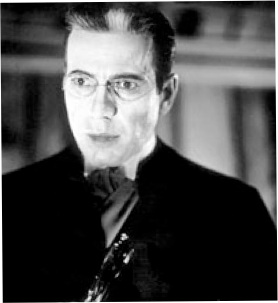 When my brother and I were 4 1/2 we were taken to see a movie called X-76 Bloodrust. I can’t find a single living soul who has ever heard of this movie. Not even John Landis.  What I gleaned about the plot, which was observed through a space between two fingers covering my eyes, was that this undulating creature (that looked like vomit, by the way) was created in a Sparkletts bottle, and if it touched you, you would die. I think it might have been the poorer cousin of The Blob. The denouement had this vomit creature trying to force its way out of a baggage hold in an airplane and the passengers freaking out. My brother slept with a nightlight for the next 11 years. His head wrapped tightly with the sheet and just the tip of his nose poking out so he could breath, because we all know that monsters can’t touch sheets or blankets. I on the other hand became fascinated with Science Fiction and horror.

Charles Laughton’s Quasimodo, Boris Karloff’s Frankenstein, Bela Lugosi’s and Christopher Lee’s Dracula and Henry Hull’s Werewolf of London (definitely more sexy than Lon Chaney Jr.) I even remember an early Humphrey Bogart chiller called The Return of Dr.X. where he played a man who had been executed and was brought back to life by the laziest of plot devices: electricity. His line to the girl he kidnapped and brought to a remote cabin will stay with me forever: “Don’t bother to scream, no one can hear you”, as he pulls out the biggest fuckin’ hypodermic needle I’d ever seen. Thass what I’m talking ‘bout!

I had a subscription to Famous Monsters, Fangoria and Creepy. I had one beef about some of these films.

As a tomboy, it always annoyed me when the population of a city is desperately fleeing from a stomping behemoth and the girl “love interest” trips. Christ! Talk about high maintenance.  I always felt sorry for the guy. “Hmmm, risk my life saving this clumsy cow, or save myself……?”  For fuck’s sake woman, now is the time you’re testing the guy’s loyalty or are you just a complete pill?

There were also other annoying depictions of deliberate female self-victimization.  There would be a noise in the attic/basement. The girl would go to investigate (first mistake) wearing nothing but a baby-doll nightie/bikini, and carrying a candle/flashlight to protect her. I thought, she deserved what she got.  At the time, I didn’t understand these things were written by men. Ahem. I loved the William Castle movies as well as any pick of Vincent Price ones. Then came the Hammer Films.

A British Film Studio whose stalwart casts usually had Christopher Lee, Peter Cushing and the ultra fabulous Barbara Steele. The Hammer films were often trilogies modeled after a 1940s classic The Dead of Night. I liked that. More bang for your buck. Dead of Night had a vignette with Michael Redgrave that was the inspiration for the movie Magic, where the dummy takes over his ventriloquist.

As time went on, movies like Swamp Thing was a horse of a different..uh, color, when it came to heroes. Wes Craven, in my mind has remained original ever since with Nightmare on Elm Street and Scream.

George Romero’s Night of The Living Dead was so effective, I think, because it looked like news footage. But Dawn of The Dead is a masterpiece. One of the few movies I own on VHS. John Carpenter’s adaptation of The Thing; inspired. And when someone of that genre shows that they have a sense of humor with a movie like They Live, I’m theirs for life.

I would be remiss if I didn’t mention Larry Cohen.  His credits are often as a screenwriter and script doctor, but his films are unlike anything you’ll ever see. Most people know him from It’s Alive, but, my friends…..!
“Q” is about a pterodactyl living on top of the Chrysler building, but it isn’t treated that way and Michael Moriarity as the star is a sensitive, brooding ex-con to David Carradine’s disbelieving cop. Also,  God Told Me To. I only wish I was in the room during the pitch meeting for that. All I can tell you is that it has religious overtones, or should I say, sacrilegious, and it involves a vagina where there shouldn’t be one. It’s a must see.

When I was doing Saturday Night Live, Howard Shore took me to Times Square to see my first David Cronenberg movie: The Brood.  Oliver Reed plays a controversial psychiatrist to patient Samantha Eggar, who manifests her rage by birthing The Brood.  I have worshipped at Cronenberg’s church ever since.

Finally, the Japanese invasion.  I’m not talking about Mothra or Rodin.  Never liked that shit. I’m talking about The Ring, and The Grudge.  Like the first brave man who tasted an oyster, I often wonder who thought of adapting these movies for an American audience.  Brilliant is all I can say. Especially since I’ve seen the original versions, which have all sorts of Japanese mysticism and are not terribly accessible.

My theory about scary movies is that it’s a nice release to see people who are in a lot more trouble than we’ll ever be in.  We see this AND we’re eating candy.  Can’t beat it.

Here is my top 20 list for Halloween in no particular order of lovin’:

(1932) This one stars Boris Karloff and Bela Lugosi. Check out the art direction in this movie. There’s a digital clock. It’s amazing in every way. Sick and amazing.

16.  The Bride of Frankenstein