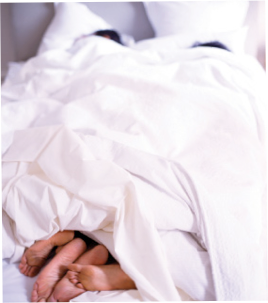 It seems like most of our married life with kids, my husband, Chad, and I reenacted episodes of Prison Break every time we wanted to go on a date. Sometimes we’d wait until our girls were asleep before we left them with the babysitter and scaled the walls, praying that a klieg light of a toddler wail didn’t catch us mid-tiptoe. Whenever we accomplished this, the freedom intoxicated us to a point where we’d be laughing our guts out as we screamed down Beverly Glen in the “getaway” Acura.

Our married dating life was finessed in the most unfriendly circumstances. Take our remodel: Four years ago, we survived what few couples have lived to tell. The remodel was so extensive we had to move out for a year. Picture a 1,200-square-foot, two-bedroom rental with one bathroom, two kids and two dogs. Ahem. Our stolen moments of romance were garnered by shopping for materials—or, as someone at our hardware store called them, house jewelry.

You know you’ve found the one person in the world for you when you agree on almost everything in the decorating process. It was a complete joy to find that after scanning rows of granite slabs, our eyes stopped on the same one. Kinda like Lady and the Tramp, when their lips meet midway into a spaghetti noodle. I also got to see Chad turn into Prince Valiant as he smote the contractor who tried to tile over a roof that hadn’t had the tar paper properly heated and sealed—not once, not twice but three times! The experience left Chad with some graying at the temples. He thinks it’s awful, but I find it dashing.

It’s also a bit of an equalizer, seeing as Chad is 12 years younger than me. This I discovered when we had just started dating. Soaking in a hot tub at Wheeler Hot Springs in Ojai, he casually mentioned turning 26. I was stunned: “You mean you were 25, and now you’re 26?!” He looked at me like I should have known. I was 37, and this bomb he had dropped made me feel like Norma Desmond.

But there’s nothing quite like overcoming obstacles to romance. It’s hot, to quote Paris Whatshername. That’s why we were caught unawares when we found ourselves alone for two months, after our kids dropkicked us for an awe-inspiring summer camp in Connecticut.

This is Los Angeles, for crying out loud. Nobody goes to camp for that long! I know, they’re confident kids—we’ve done our job. Piddle. We were flummoxed. We shambled out of our respective offices and noticed the guards had left the cell doors open and taken off. We didn’t know whether to jump for joy or hang ourselves like James Whitmore in The Shawshank Redemption. Could we really make it on the outside?

The camp cost a bundle, so traveling was out. But we don’t need no stinkin’ vacation. We decided on a staycation. For the first few days, we did things like dance in our underpants. We sang a song our friends Rod and Lindsay made up, to the tune of “Land of a Thousand Dances.”

Of course I’m kidding about the magazine—it’s Juggs. And actually the whole adapted song thing was like a flashback to my days on Saturday Night Live.

Then the reality set in, and we began to miss them…terribly. We’d be sitting in the living room holding hands. The house would be so quiet—just the dogs looking up at us, panting, along with the sound of clocks ticking. Like a Harold Pinter play without the comedy.

Then something unexpected happened. We rediscovered our friendship, and we confessed all of our dirty secrets. We felt so un-American about not taking this alone time to go hang-gliding or take dance lessons or something else edgy and, well, active. But as Dungeons & Dragons as it sounds, we both loved to watch TV. We wanted to chillax.

On the couch, holding hands. A date. Me and Chad. We answered to no one except the dogs…Oh, Christ, the dogs!