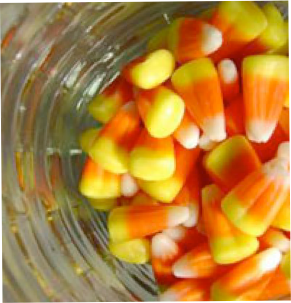 Children of the Corn

Lewis Black, a very funny fella, does a great bit about Halloween on his Carnegie Hall CD.   I heard it when it was released several years ago and laughed right along with him until he took a turn that had me screeching to an emotional halt.

He started putting down Candy Corn.  You know, the stuff that embodies my fond memories of a holiday celebrating my drug of choice; sugar.  Moreover, I saw Candy Corn as a rare animal that was only seen during the harvest.  Wax lips and fingernails were also part of that rare species you just couldn’t find any other time.

Basically, he was saying it tasted like ‘oil’.  That ‘haunted’ me because there ARE some candies made with inferior ingredients that DO taste like oil.  Maybe his folks were the ones who bought generic ‘cola’ instead of Coke. But that wouldn’t explain how he got it trick or treating. He wasn’t that much younger than me, so it wasn’t the kind of thing where you could say “con sarn-it! They don’t make Candy Corn like they used to by cracky!”

When I mentioned this to friends with my righteous indignation, I was shocked to find that many agreed.

I thought Lewis Black was alone on his island of misguided thought.  But it was me. I was the one in the minority.

Time passed and the other day, I was in the lobby of my voice over agency and there was a candy dish with the corn in it.

I grabbed two or three and popped them in my mouth. They were foul.

I was stunned. “What is this shit?” I thought. Lewis Black was right. It tasted like oil.   I’ve had countless “you can’t go home anymore” moments in my life, but this crushed me.

I called Amy (our venerable editor of oneforthetable)

Me: I’m so bummed

Me:  Well, candy corn used to be my absolute favorite Halloween candy and I had some yesterday and I can’t believe I ever liked that stuff. Am I so off base? What I tasted can’t be the stuff I remember.

Amy: It isn’t the same stuff.

She said this with the confidence of someone who has cared for the traumatized many times.

Amy: Go to Candy Alley, they have the real stuff. The stuff you had when you were a kid.

Even though I never knew the name of the place, I knew exactly where she meant. This place is also a stationary store called Pulp and Hide on San Vincente in Brentwood. Family owned, when I arrived there about a half hour after hanging up with Amy, I was greeted by both daughters and their mother who were very exited because right at that moment, a story was appearing on the TV Food Network all about their little old place. It was really cute. Brentwood Country Mart is unusual and some of those shops (not many) have been there forever and a shopkeeper from across the way rushed in and assured them she had “put on the Tivo thingy”.

It had been some time since I’d been in a candy shop.  This place was overrun with dark wood shelves that were stuffed with a kaleidoscope of candies. Bins with glass panels displayed the old and the new: jawbreakers, gumdrops, candy corn, gummy worms etc.

The ladies were very friendly. They introduced themselves and I told them my story.

“Oh, ours are made from very good ingredients”.

Amy’s daughter Maia researched it and found there were all sorts of wonderful things that went into the making of candy corn like fondants and marshmallow.

They gave me a generous sample.  From the first bite I was jettisoned back to 195….er, never you fucking mind.  It was great!  I could have wept right there.

I wasn’t much different from Lewis Black. He talked about performing many of the same rituals we all did. Biting the corn in order: small white nib, orange center and finally the yellow kernel. He even put them on his teeth as fangs, just like me.   The poor guy.  While I was enjoying my Cadillac of Candy Corn in Southern California, Mr. Black was in Washington choking down Kandy Korn.