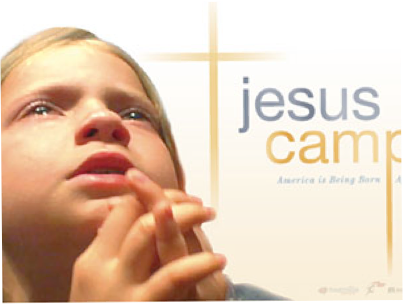 For sometime now, I’ve watched with mounting fear, the destructive impact of the Christian Right. George Bush’s election was a Greg Stillson moment right down to taking us to an unwarranted war in the name of ‘spreading democracy’. Which is code for “The other day, I was talkin’ to Jesus…”

The documentary, Jesus Camp, encapsulated a deliberate and stubborn insistence upon denying facts in the name of faith. It reminds me of an article I read about a time in the Middle Ages when the three main religions came together to consider whether faith and science could co-exist. Leaders of the Christian and Jewish faiths agreed that they could. The Muslim leaders felt that they couldn’t.

It seems that the Christian right is aligning themselves more and more with that ideology every day.

The Jesus Camp documentary’s defining moment for me, was a scene in a household with a mother and her two children in the kitchen. They were at breakfast and the kids were studying their schoolbooks that were written by the network providing for the home-schooled Evangelicals. These books, which espouse creationism, have dinosaurs existing at the same time as humans. The mother was quizzing the children with the smug satisfaction of those with the right answer while all others are sadly mislead. “What do we know about global warming?” ‘It’s a hoax.” They chimed.

It seems to me that one of the fundamental notions of any kind of spirituality is ‘live and let live’…..unless you’re a radical muslim. Then its “if you don’t believe as I do, I’m gonna kill you. The Christian right is looking more and more like this every day. I’d heard that Leonard Dobson prayed for rain to wash out the convention in Denver. Have you ever heard of anything so infantile? What’s so dangerous about this is that our candidates have to cow tow to these idiots. The very idea that they would meet with Rev. Rick Warren to get vetted by a constituency that believes in such nonsense is appalling.

But it doesn’t stop there. The anatomy of their denial of rational thought in the face of facts is mirrored by conservative Republicans. Watching the pundits on Fox News last night, trying feebly to undermine the message of Obama’s speech was pathetic. Yet, it will carry weight with an alarming amount of people who are intent upon believing that they were never wrong in supporting Bush. And that’s really what its all about: Ego.

Feelings of powerlessness and helplessness often lead to radical thought or deed. In this case, its disguised as beneficence and goodness.